With the advancement of food technology and new processing techniques in the world, controlling safety and hygiene measures has become quite easy. Growing demands for meat-based products compel the food processors to step ahead and compete in this ever-growing competitive market.

Slaughtering involves the killing of domestic livestock animals for food. According to the Humane Slaughter Act, 1958, the animals are supposed to be “stunned” i.e. made unconscious or insensible to pain before their throats are being slit.

Firstly they are unloaded from trucks in the slaughterhouse. Generally, they are kept off from feed to make the further dressing procedure easier. However, water should be kept in their holding pen as per the requirements of the Humane Slaughter Act. 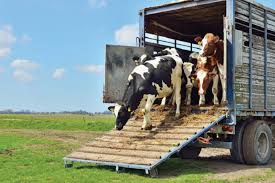 If the animals have been traveled from far places in vehicles, they are provided rest overnight before slaughtering. Resting decreases the stress of the animals arisen from the traveling, thus helps in improving the quality of the meat.

How resting of the animal improves the quality of the post-slaughter meat?

If the animals were under stress during traveling, their glycogen reserve will be more utilized for energy production in order to cope up with the stress. And, if the animal is slaughtered immediately after unloading from the truck, the body of the animal will not be able to replenish the depleted glycogen (which was possible with proper resting), thus the slaughtered meat will have less glycogen content.

It is used to render each animal to become completely unconscious with minimum excitement and discomfort.

Few of the advantages of stunning are-

Few of the worldwide practiced methods of stunning are-

Now, lets briefly take an overview of the above mentioned stunning methods-

5. Carbon dioxide stunning method- The animals are passed through a gas chamber containing 70 % CO2 gas for 45 seconds exposure time. However, this method is only adopted for smaller animals like pigs etc. Cattles are not stunned using this method.

6. Electrical Stunning method– This method is also adopted for smaller animals only, not cattle. In this method, electrodes having alternative current flow are made contact with the head of the animal, thus making a rapid increase in blood pressure and heartbeat leading to unconsciousness.

Shackling means tying the back legs of the animals, either with a chain or with rope to restrain from moving. Then, it is hoisted in the air to facilitate further operations.

Now a sharp blade is inserted in the neck of the animal, severing the jugular veins and the carotid arteries, leading to exsanguination and death. ( exsanguination means bleeding).

The hides of animals are removed either by mechanical process or manually. The head and shank of the animals are also being removed.

Bunging is a process of providing a stopper or cork to the rectum of the animals to avoid the contamination by the fecal matter to the other body parts of the carcass. 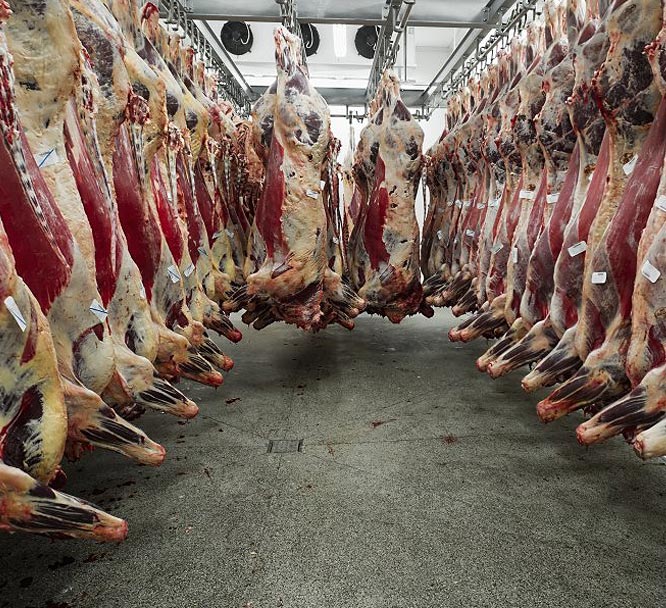 It is the process of removing the internal organs such as intestines, stomach, heart, lungs, kidneys etc. from the carcass. The stomach and intestines contain a large number of bacteria such as E.coli O157: H7, Salmonella etc., which may contaminate the carcass when allowed in contact.

The carcass is washed with antimicrobials, ambient temperature water or with organic acid washing, which can act as a hurdle for the microbe’s survival. Further washing, weighing of the trimmed carcass is done.

Chilling is a process of storage of the carcass in the temperature range of 0-4 degree Celsius. Chilling prevents the growth of bacteria which can create spoilage. The lower temperature during the chilling of the carcass, the more inhibition of the harmful spoilage bacteria.

The carcass is ready to be stored in coolers, which are large refrigerated warehouses with proper maintenance of temperature, relative humidity, and the air flow. Now, fabrication is done i.e. carcass is cut into smaller parts, and further final processing till packaging is done in other processing units in which they are shipped.

14. Processing of the by-products–

The resulting byproducts from the carcass may be skin, intestines, blood, horns etc. The skin of the animals are widely used in leather industries, intestines are used as casings for making sausages, blood may be mixed with either cornstarch or other extenders and used as a filler in the sausages.

The evolving food technology and modern food processing techniques should focus on reducing the pain and cruelty to the animals to a ZERO level during slaughter. Animal Slaughter for food cannot be stopped in any case due to the increasing food demand in this ever-growing world population. However, ensuring the adoption of a most humane way of slaughtering techniques can make the animal’s life, pain-free and stressfree.