You might have heard the very famous nursery rhyme in which “Little Miss Muffet” eating curd and whey. We know cheese is made by squeezing the curd after draining the separated and leftover whey. Though, here she was eating the cheese in which the whey was not drained.

Have a look at it-

Sat on a tuffet,

Eating her curds and whey;

There came a big spider,

Who sat down beside her

And frightened Miss Muffet away

Cheese has a very long and ancient history we can think of, maybe some 5000 years ago.

Cheese is made by coagulating milk either by acid or by rennin enzyme or both. Then the curd and whey separate out in layers.

The Whey is drained out by pressing or simply leaving the mixture for some time.

Cheese also has a desirable unique flavor & texture which is obtained by curing i.e. ripening (holding it for a specific time at a specific temperature and humidity. 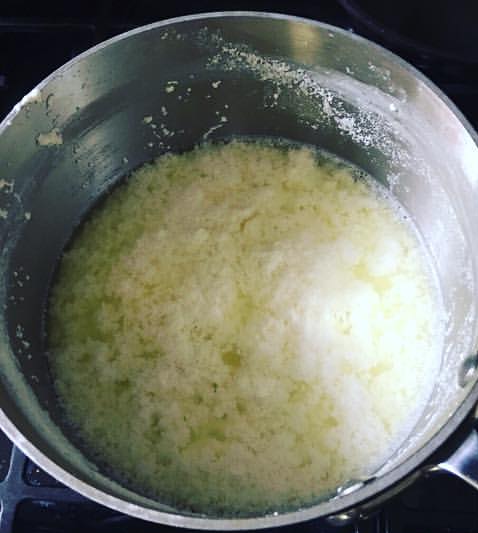 Thousands of years ago, a trader was carrying some milk in a calf’s stomach. After sometimes, he noticed that his milk had solidified. He was clueless.

Actually, the rennet enzyme present on the inner linings of the stomach of the cow made the milk to coagulate and solidify. Then onwards, cheese was prepared in this way until they knew other methods of curdling like from lemon juice, or citric acid, etc.

Now let us make some Cheese

Cheese can be made from Cow milk, goat, buffalo or even camel milk.

The general milk composition is given below-

The mineral mostly present is Calcium beneficial for bone strength.

The proteins present in milk called Casein molecules are suspended in the milk. The 3 types of casein proteins are Alpha, Beta & Kappa Casein.

We can imagine the casein micelle as a spherical mass having alpha and beta caseins being trapped in a rubbery outer covering called kappa casein.

So, when we try to make cheese by curdling the milk, we actually take the alpha and beta-casein out from the trap of Kappa casein, but that requires an accurate specific temperature.

For this release and curdling, either rennet enzyme can be used or some starter culture of microorganisms can also be used. Hence, these alpha and beta caseins are released & are responsible for the curdling process.

Finally, coagulation takes place & the precipitate is separated out from the whey by squeezing or by leaving itself to drain.

Since this cheese can be made easily at home, so it is also called Cottage cheese. Regular cottage cheese contains 8% butterfat. However, butterfat can be varied and depends mainly on the method of preparation of cottage cheese.

You can see the different types of cheese here.

Cheese has a high nutritional value, say 150g cheese is equivalent to a total food value of 1 Litre milk.

During the First World War, the American soldiers needed proteins in a good amount from meats, so the Americans promoted cottage cheese among its citizens to consume more veg foods instead of animal foods, so as to save the animal protein foods for the infantry rations. Have a look at the poster for this promotion by America… 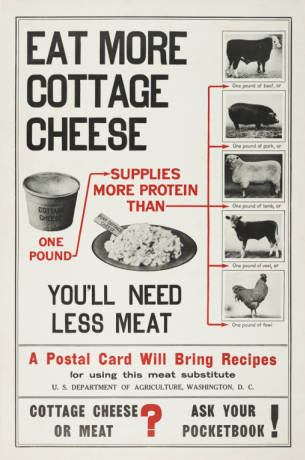 Promotion of Cottage cheese to save animal foods for American soldiers

Hope you enjoyed this article about cheese. See other interesting articles related to food technology and processing here.